BATTLEFORWORLD – October 4, 2017: I know that this does not appear to be a likely prospect at the moment, but back channel conversations are in motion to bring President Trump and President Putin together at the appropriate time.

The Deep State and their media conglomerate are trying extremely hard to destroy Trump’s character and turn much of the public against him, but in the end this will come to naught.

References – Links:
[ Trump confirms plans to meet with Putin during his Asian tour | Kremlin Reveals What Putin May Discuss With Trump If Their Meeting Takes Place ]

Trump and Putin to meet, expected to talk Syria and North Korea

RTAMERICA – November 7, 2017: Russian President Vladimir Putin and US President Donald Trump are set to meet a second time next week, and are expected to discuss a settlement in Syria and the situation with North Korea. RT America’s Manila Chan breaks it down. Then, Sourabh Gupta, policy specialist at the Institute for China-America Studies, joins ‘News With Ed’ to discuss Pres. Trump’s Asia visit.

TASS – November 10, 2017: Russian President Vladimir Putin and his US counterpart Donald Trump have shaken hands and held a brief conversation at the APEC summit. The two leaders had an opportunity to do so while the summit’s participants were taking a group photo wearing the national costumes of the host country. Link: Read Complete Article 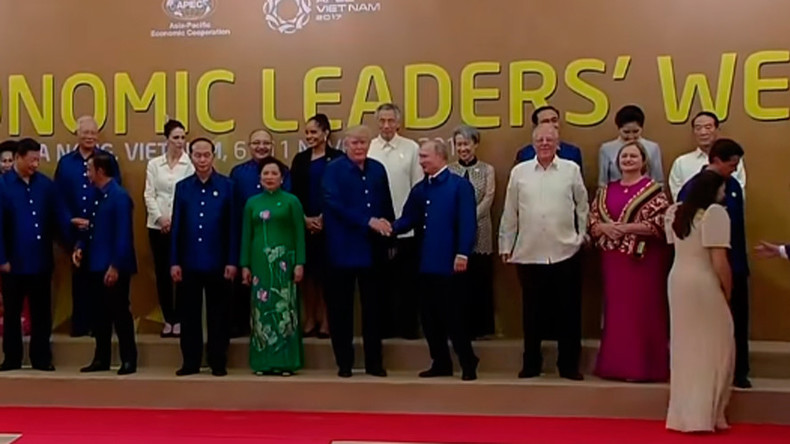 Pres Trump and Putin shake hands – positioned next to one another for Leaders class photo at @APEC “gala dinner.” pic.twitter.com/SLANUZ0K1s