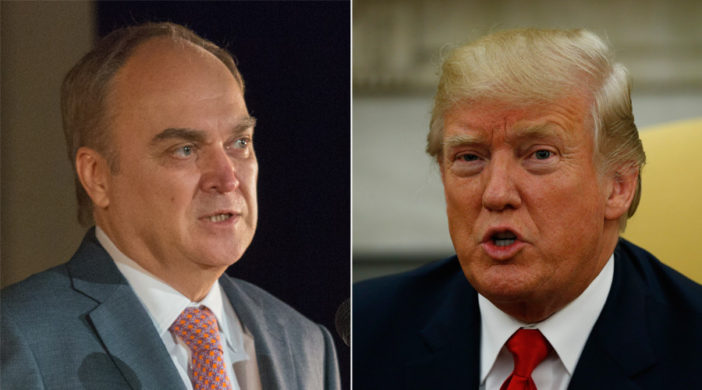 “I was received by President Trump, I presented my credentials. For my part I said that we are looking forward to an improvement in the relations between our two countries,” Tass news agency quoted the ambassador, Antonov, as saying.

“President Trump received me in a warm and friendly way … The atmosphere was very genial, constructive and welcoming. At least, that was my personal feeling,” Russia’s RIA news agency quoted Antonov as saying.

“We, together with his colleagues, his staff, agreed to continue our cooperation.”

“I said that I look forward to working with the U.S government in the area of Russian-American mutual interests. And I said that, as far as Russia is concerned, we are ready to do that, we’re ready to take concrete steps.” Link: Read Complete Article

Trump To Meet New Russian Ambassador To US Antonov On Friday

RT – September 10, 2017: The new Russian Ambassador to Washington, Anatoly Antonov will present his credentials to US President Donald Trump on Friday, the White House has confirmed.

Earlier this week, Antonov presented his credentials to the US Department of State, and said he was awaiting a meeting with Trump so he would officially become the new envoy of the Russian Federation in the US.

Antonov, a career diplomat who previously served as Russia’s deputy foreign minister, was appointed by President Vladimir Putin last month. He is replacing Sergey Kislyak, who was in charge of maintaining Russia-US relations for almost a decade before he ended his tenure in July. Link: Read Complete Article

WH: There Was ‘Not A Meeting’ Between Trump And New Russian Ambassador

TALKINGPOINTMEMO – September 10, 2017: The White House late Friday swatted down claims made by Russia’s new ambassador Anatoly Antonov to the U.S. that he had held a “warm and friendly” introductory meeting with President Donald Trump earlier in the day.

“There was not a meeting,” White House Press Secretary Sarah Huckabee Sanders said in an email to TPM. “He was here for a credentialing ceremony with 12 other new ambassadors and their spouses.”

Anatoly Antonov was far more loquacious in his comments to the Russian press, characterizing the initial meeting as chummy.

“The atmosphere was good, constructive and friendly,” Antonov said, as quoted by TASS. “President Trump met me cordially. We agree with his staff members to continue our contacts.” Link: Read Complete Article

RT – September 10, 2017: US Undersecretary of State Thomas Shannon will visit Helsinki on 10-12 September, where he will meet Russian Deputy Foreign Minister Sergei Ryabkov, the State Department has announced in a press release, “to address areas of bilateral concern and cooperation.” The meeting will take place amid a diplomatic spat between Washington and Moscow, which was renewed in August when President Donald Trump approved new sanctions against Russia. This was followed by Moscow ordering the US to cut its diplomatic staff in Russia by 755 people, and then Washington ordering closure of three Russian diplomatic locations in the US. Link: Read Complete Article